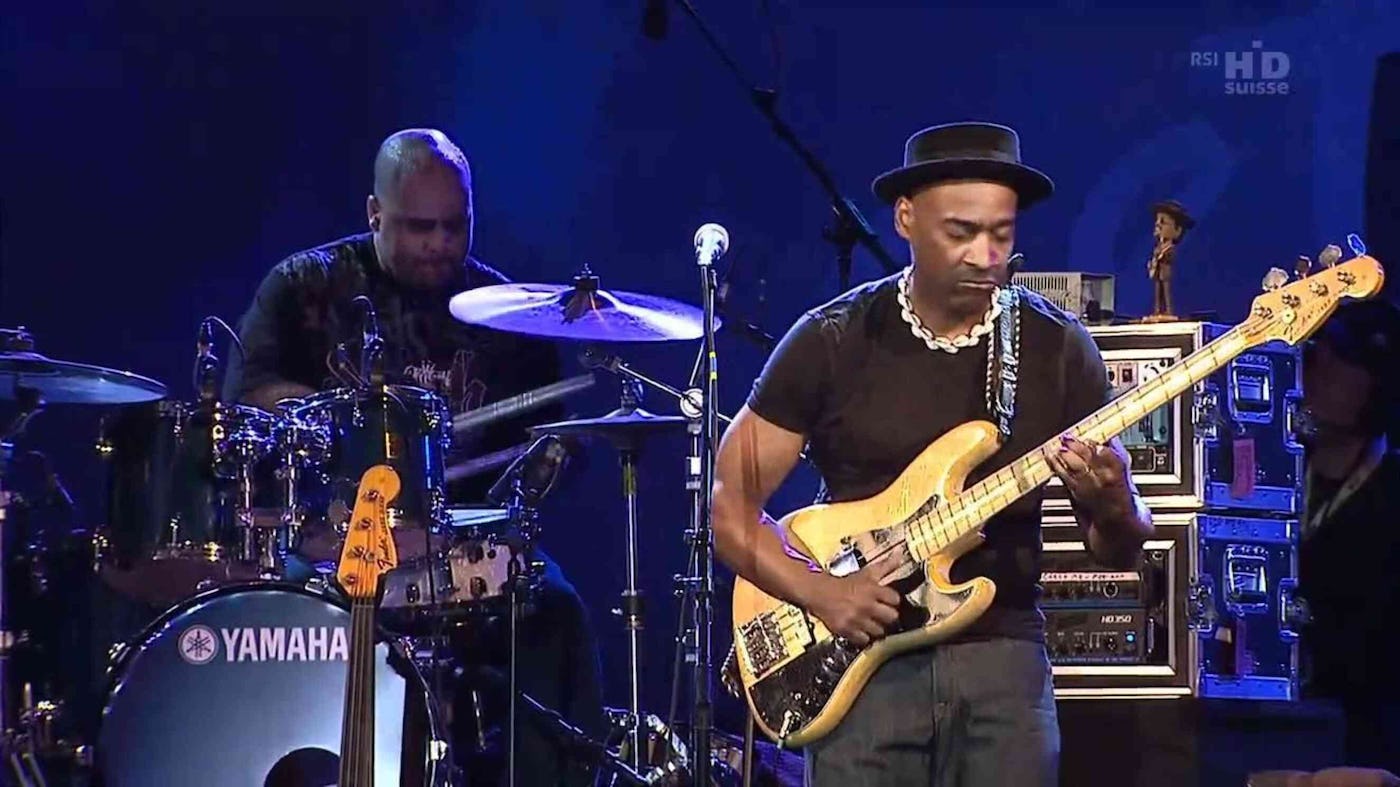 To mark the release of Phil Mann’s Essential Slap Bass Rudiments Course within the SBL Academy, we’ve compiled 20 slap bass grooves that you must learn if you want to call yourself a true bass hero …

Nearly every beginning bassist wants to learn how to play slap bass. It’s a killer technique that arrived in the late ‘60s (thanks to Larry Graham with Sly & The Family Stone) and involves thumping a string with your thumb while using hammer-ons and pull-offs instead of the usual root note pulse. As for your hand position, the basic technique usually combines a wrist-twisting thumb slap with an index- or middle-finger pop.

Before you do anything, get yourself a new set of roundwound strings. You don’t want to be slapping on tired old strings. If the thought of combining slaps, pops and fretting-hand slaps still makes you feel uneasy, then if you're not already a member over at scottsbasslessons.com, grab a 14-day free trial and delve a little deeper into the technique with our tailor-made courses and live seminars. Click here to find out more.

Having invented slap bass with Sly and the Family Stone, it’s no overstatement to say that Larry Graham impacted the bass world with as much force as Jimi Hendrix did with the electric guitar. Hair centres around Graham’s classic thumb-style, but there’s much more to this line than straightforward thumb-slaps. His time and feel are second to none.

Taken from Pleasure’s fifth album, which was a momentous one for the Oregon funk outfit, Glide showcases a seminal bass groove by bassist Nate Philips that uses double-stops, slides, hammer-ons, double-thumbing, triplets – you name it! The beginning is pretty sparse, but it soon picks up. This is old-school slap bass at its finest. Be sure to take it slow before working it up to tempo.

Once dubbed the ‘thumbslinger’ for his cutting edge slap-style, Marcus Miller’s aptitude on the bass has established him as one of the most recognisable voices since Jaco. He was just 20 when he recorded Rio Funk, which introduced the world to his superhero range in groove. Also note his tasty slap solo.

Aside from his groundbreaking work with The Brothers Johnson, Louis ‘thunderthumbs’ Johnson kept a steady session schedule, playing on both of Michael Jackson’s landmark albums, Off the Wall and Thriller. Get On The Floor centres around the bass line, with numerous ghost notes, accents and left-hand slaps.

Mark Adams was ever present in Slaves line-up and remains one of the bass world’s most underrated players. Stone Jam, the title track from the band’s fifth studio album, sees him let loose with a monster slap groove in F# minor. Fast-forward past the guitar solo to hear Adams really go for broke, and be sure to check out Never Get Away from the same album.

Bass heroes don’t get much bigger than Stanley Clarke. His career covers years of music making with a glittering array of names from the jazz world, not least with Chick Corea in Return to Forever. This track is taken from his sixth solo album, on which there can be no escaping his signature tone and flamboyant bass chops.

One of the most talented instrumentalists of all time, it should come as no surprise that Prince was also a fantastic bassist. In fact, his first four albums were basically one-man efforts, with a few guest spots (though he kept bass duties to himself). His slap style owes much to his hero, Larry Graham.

An iconic figure in the bass world, Doug Wimbish forged a formidable reputation during his time with Sugar Hill Records. New York New York is classic Grandmaster Flash. It has a repeated two-bar slapped phrase during the verse, with Doug playing a different fill on the last three beats of the second bar. Check out the sextuplet in the seventh repeat!

Originally recorded on Patrice Rushden’s 1982 album, Straight from the Heart, Forget Me Nots reappeared in 1997 when Will Smith sampled the chorus for his soundtrack rap, Men in Black. It features the classy bass work of L.A. session stalwart ‘Ready’ Freddie Washington on his 1972 Fender Precision. The entire track revolves around the eight-bar bass hook.

In July 1980 Level 42 released their self-titled debut album, which saw Mark King emerge as one of the most creative and proficient bassists around. Mark used his trademark ‘chugging’ slap rhythm for this classic Level 42 line, which is doubled by a synth bass part. The main groove is a pretty busy line that's harmonically straightforward, but really drives the song along.

Originally written by Stevie Wonder in 1973, the Red Hot Chili Pepper's version of Higher Ground was the first single from their fourth studio album, Mother's Milk. Flea’s mix of punk-funk remains the core of the Chili Pepper’s sound and his slapped bassline spearheads this entire song. Check out the rolling triplet time signature!

Mark White of the Spin Doctors should be on every bass players playlist and this single from their 1991 debut is no exception. All walks of musical life is in here: including rock, funk and blues, with tighter-than-tight interlocking guitar, bass and drums that seem unstoppable. Hit it with everything you’ve got.

Slap bass and rock music – always a touchy subject, and while Tom Morello's innovative guitar work and old-school shred combine to great effect on this landmark track, it’s Timmy C who sets the groove from the start, slapping and popping his way through the lead riff. Musically adventurous and funky to a tee.

14. If That’s Your Boyfriend (He Wasn’t Last Night)

As an accomplished multi-instrumentalist and songwriter, Meshell Ndgeocello took the bass world by storm when she burst onto the scene with her debut album, Plantation Lullabies. This weighty track features a deep-pocket slap groove that uses syncopated rhythms to anticipate the stronger beats. There’s little harmonic variation, but Meshell’s percussive technique creates a feel all of its own.

Lauded as one of the most influential players to ever emerge from the UK bass scene, Stuart Zender’s funk-fuelled bass work with Jamiroquai in the early 90s gave rise to a new breed of bass players. Though Jamiroquai enthusiasts were already hip to him, his bass playing on this album widely cemented Zender’s credentials as a funk pioneer from that day forward.

D-Code sees stellar Canadian bassist Alain Caron taking care of business with a percolating funk groove that’s played with an immaculately even technique. Position your hand right at the end of the fretboard and try to use minimal hand movement. Alain also mutes the lower strings with his right palm and anchors his little finger against the body of his bass.

Power is a bass anthem in the key of B, which gives it a different sound to the usual slap-friendly keys of E and A. Look out for the three-finger popped chord on the first beat, the double-thumbed 32nd-note figure on beat two and some killer Larry Graham-style octaves at the end of the second bar.

Nik West has always been propelled by a sense of wanderlust, which comes in pretty handy when you've played with the likes of Prince and John Mayer. When it comes to slap bass, she certainly isn’t lacking in the chops department either. Forbidden Fruit is based around a solid groove that’s simple, fun and funky.

As a member of Prince’s NPG and power rock trio 3RDEYEGIRL, Ida Nielsen’s old-school funk meets new-school soul style undoubtedly pays homage to the purple one. In the months following Prince’s passing, Nielsen returned to her native Denmark to finish recording her solo album, and this track is a fine example of her aggressively precise slap technique.

Now that we've given you our list of the top 20 slap bass grooves that every bass player needs to know... it's time to add them to your own repertoire and, most importantly, learn how to incorporate some of these techniques into your own playing.

Here at SBL we've got some amazing resources that will help you do exactly that. Ready? Let's jump in...

Slap Bass Fundamentals With Phil Mann: Volume 1 In this course, world renowned educator, Phil Mann takes you right from the start of getting your slap technique chops together in a clear, concise and step-by-step manner that will have you slapping and popping your own grooves in no time!

Essential Slap Bass Rudiments With Phil Mann: Volume 2 If you want to get into more complex slap bass rudiments then this is the course for you! Throughout this course Phil will be taking an in-depth look at advanced 16th slap bass patterns and intricate rudiments. You’ll be covering everything from Victor Wooten’s Open-Hammer-Pluck playing to Marcus Miller’s double pluck melodies!

Want to focus on your bass line creation and groove?? Here are some more courses for you..

The Groove Formula In this rhythm-based course, Scott takes you through exactly how you can turbo charge your bass lines, grooves, time-feel and your overall mastery of the bass - with one simple formula!

Join over 15,000 bass players in the worlds leading bass education platform, which is packed with hours of step-by-step courses, live seminars, interviews and much more. click here and grab your 14 day free trial today.