Published July 27, 2019 in Bass Players You Should Know 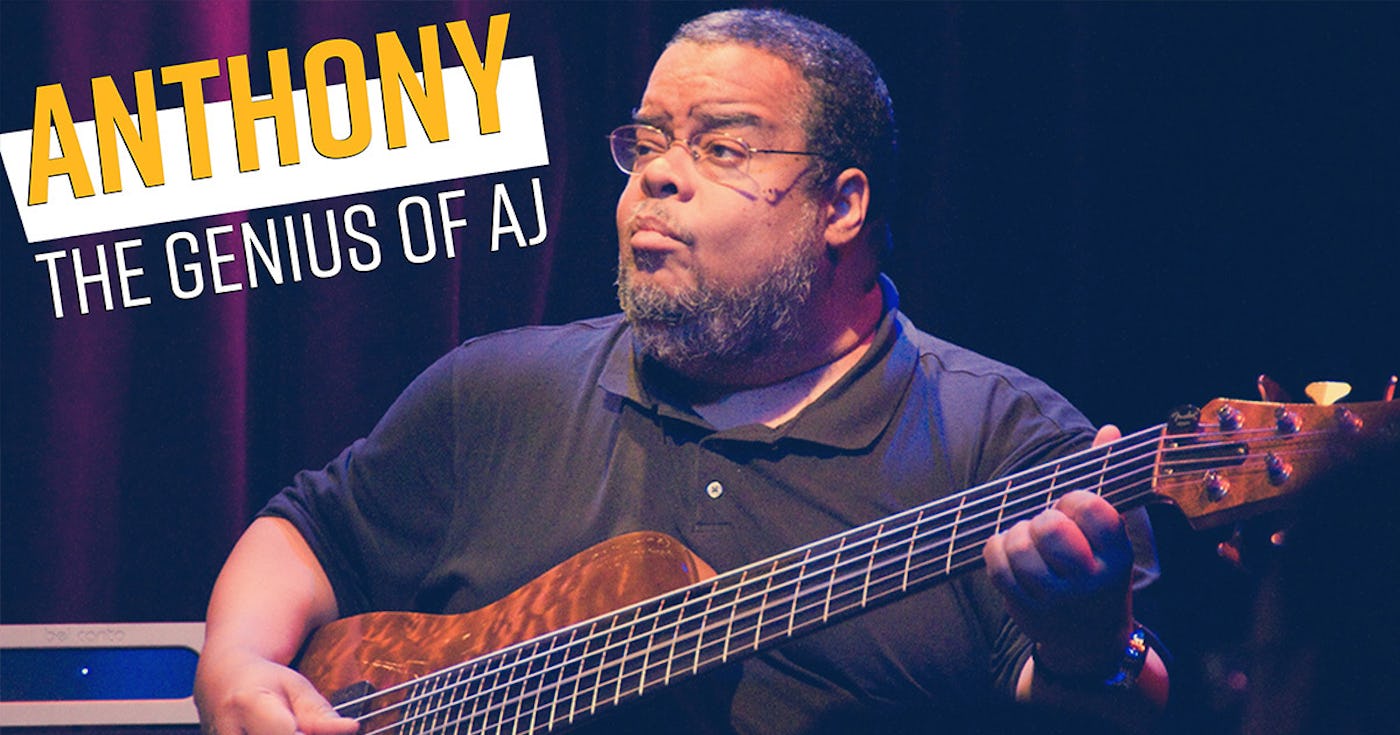 While some bass heroes have gone on to become household names, Anthony Jackson has remained pretty much in the shadows and will be largely unknown to your every day audience. BUT make no mistake - he is unquestionably one of the most important bassists of our lifetime. Not only has be worked with everyone from Steely Dan and Paul Simon to Chaka Khan, Madonna and Dizzy Gillespie, but he’s also played a huge part in the development of the bass guitar itself, coming up with the concept of a 6-string bass some twenty years before anyone else even considered it. Still not convinced? Check out this unbelievable clip with Anthony and Lee Ritenour. This is a track from Lee’s 2005 album, Overtime.

Anthony is a complete genius and I’ll arm wrestle anyone who thinks otherwise… let’s get into it!

Anthony Jackson was born in New York City on June 23rd 1952, a year or so after Leo Fender had first launched the Precision Bass. He started out on guitar aged 12, but had made the switch to bass by the time he was 16, citing his early influences as Jack Casady, who he’d heard on Jefferson Airplane’s Surrealist Pillow album in late 1966, and, of course, James Jamerson.

The beginning of a lifetime of being knocked to the floor and stomped on came in the summer of 1966 when Road Runner by Junior Walker and the All Stars was released. That was Jamerson at his best. Anthony Jackson

The French composer Olivier Messiaen was another early influence on Anthony, but according to an interview with Chris Jisi for Bass Player Magazine, it was Glen Campbell’s 1966 album, Mr Twelve String Guitar that first turned him onto the bass.

My mother took me to Ben’s Music on West 48 Street and bought me my first bass guitar – a nameless cherry sunburst medium scale instrument – for $43. Anthony Jackson

He then discovered jazz through the 1965 album The John Coltrane Quartet Plays, and 1961’s Ornette, by Ornette Coleman. Ron Carter was another big influence, and Anthony spent much of his time playing along with Miles Davis records like Miles Smiles and Filles de Kilimanjaro.

In 1970 he played on his first recording session and two years later he joined soul singer Billy Paul’s band, receiving his first gold record for the number one single ‘Me and Mrs Jones.’

Around the same time, the Maestro Company released their Phase Shifter. Check out this promo video from 1972.

Anthony had heard the Phase Shifter being demoed at Manny’s Music in New York, but the owner insisted it wouldn’t work for bass. Anthony bought one anyway and in 1973 he made bass history (and earned a writers credit while he was at it) for his iconic bass line on the O’Jay’s hit, ‘For the Love of Money’. Here’s Anthony’s bass part in all it’s glory.

Another key factor to Anthony’s bass tone on that record came via his Rotosound roundwound strings, which he’d also begun experimenting with in 1972.

People were saying, “They’re noisy, they’ll eat your frets, and they make the bass sound too much like a guitar.” But to me they were a revelation. Combined with the flat pick, my instrument assumed an identity completely removed from my Jamerson self, accentuating Jack Casady’s influence. Anthony Jackson

Word of Anthony’s innovative approach to the bass and his sophisticated playing style soon spread around the New York studio scene. A demo for an arranger named Leon Pendarvis led to a session with Roberta Flack, and it was on another session for Leon that Anthony first met drummer Steve Gadd and forged what became known as the Pendarvis Rhythm Section, alongside Ralph McDonald or Crusher Bennett on percussion and David Spinozza, Hugh McCracken or Jeff Mironiv on guitars.

A 13-month stint with Buddy Rich at Buddy’s East Side club was yet another stepping-stone - despite Anthony being sent home in shame following one initial show because he hadn’t done his homework. Needless to say, that didn’t happen again. Check out this early recording of a 21-year-old Anthony with Buddy Rich taking a solo on the Charlie Parker tune, Billie’s Bounce.

Anthony went on to tour with Roberta Flack and violinist Michael Urbaniak before spending 1977 in LA playing with Dave Grusin, Lee Ritenour and Tom Scott. A year later he was back in New York, and about to embark on an incredible period of studio work that was captured on standout albums with David Sanborn, Quincy Jones, Luther Vandross, Paul Simon Al Jarreau , Steely Dan and countless others.

By now Anthony had taken his palm-muting technique with a pick to a completely new level. Check out Al Di Meola’s album Elegant Gypsy from 1977 as well as his 1980 album, Splendido Hotel.

Here’s a great live clip of Anthony with Al Di Meola, plus Jan Hammer and Steve Gadd, a couple of years later at the Savoy in New York.

Another important call came in the early 80s, this time from Chaka Khan, inviting Anthony to play on her 1980 Naughty album. A year later he was back in the studio with Chaka once again this time for the seminal album, What Cha Gonna Do For Me.

To get an idea of just how much respect and admiration both Chaka Khan and producer Arif Mardin had for Anthony, when he wasn’t satisfied with his initial bass parts for the Naughty album he was allowed another three months to recompose the bass lines AND all the studio time he needed to track them again. Who knows how much that would have cost, but the end certainly justified the means. Here he is onstage with Chaka in 1981 together with both Randy and Michael Brecker.

Anthony also played on two tracks for Steely Dan’s Gaucho album - Glamour Profession and My Rival. And got the call for Donald Fagen’s Nightfly album in 1982, playing on the opening track, IGY, and Ruby Baby.

By 1982 Anthony was now playing his 6-string contrabass exclusively. Having played a 1973 P-Bass with The O’Jays on For The Love of Money, Anthony had also played a Gibson EB-2D with Buddy Rich and many a hit record on another Fender hybrid consisting of a 1973 Jazz Bass body and a ‘75 Precision neck – this bass was affectionately known as his ‘Career Girl’.

But during 1975 Jackson began persuading luthier Carl Thompson to build him his first contrabass guitar – a 6-string bass with a low B and a high C string. Anthony was a firm believer that the bass guitar was a member of the guitar family and not, as Leo Fender saw it, an electric version of a double bass.

My feeling is: Why is 4 the standard and not 6? As the lowest-pitched instrument of the guitar family, the bass should have had 6-strings from the beginning. The only reason it had four was because Leo Fender was thinking in application terms of an upright bass. Anthony Jackson

Jackson and Vinny Fodera (who’d actually built Anthony’s Ken Smith 6-string bass) were soon to join forces again for a series of 36-inch prototypes, beginning with his first signature model in 1984 and in 1989 Fodera presented Anthony with his first single cutaway signature model. Fodera’s current flagship Anthony Jackson Signature bass is one of the most challenging builds they offer. With a 36-inch scale, 6-strings and 28 frets!

Being the restless genius that he is, Anthony’s pushing me constantly to try and do better. And the single-cutaway concept came about – the basic idea of connecting more of the body to the neck, thereby having a more immediate connection so that vibrations could pass more freely between the body and the bass. Vinny Fodera

There’s one more chapter in the Anthony Jackson discography that we simply have to talk about – the trios.

Anthony has played in some incredible piano trios, most recently with Japanese virtuoso Hiromi, but also with the late, great Michel Petrucciani and Michel Camilo.

Anthony had met Michel Camilo in 1979 as members of the New York Octet, French Toast. And when Brazilian singer Tania Maria asked Michel to open for her at Carnegie Hall in 1984, the Michel Camilo Trio – with Anthony and Dave Weckl – was formed.

Anthony is a genius and a total master. We’re both perfectionists, and he instinctively knows exactly what I’m going for. I hear him when I write, and I constantly look to challenge him. Michel Camillo

The 2002 album Triangulo captures the trio at the top of their game and showcases Anthony’s expressive use of a volume pedal. Here he is onstage with Michel Camilo’s All Star New York Big Band from the "Live in Altos de Chavón" concert.

And before we move on, you simply have to check out Anthony with Michel and drummer Horacio Hernandez on the documentary Calle 54.

Anthony had another heavyweight trio with Steve Gadd and French pianist Michael Petrucciani. Here they are, live in Stuttgart.

But it wasn’t just piano trios Anthony was interested in. He has played with a fair share of guitarists too, from Steve Khan to Mike Stern. He also built up a pretty extraordinary reputation playing with guitar guru Wayne Krantz and Steely Dan drummer Keith Carlock with fans coming from all over the world to see them at the legendary 55 Bar in New York.

And just when you thought there was no where left for Anthony to go following such an illustrious sideman career, in 2010 he collaborated with Greek virtuoso bassist Yiorgos Fakanas on a solo album called Interspirit.

And so I rest my case. For me, Anthony is the ultimate low-end master, and a true genius, virtuoso and innovator on the bass. His bass sound alone, especially when he plays with a pick and through a flanger or phaser pedal, is a constant source of inspiration. He is such an incredible and unique musician, I can’t think of anyone that has the same level of intensity as Anthony does. Here’s a great clip from a pretty heated interview where Anthony lays down the law when it comes to his dedication to the bass. He is truly are one of a kind.