LIMITED TIME - SAVE $50 OFF THE ANNUAL PLAN

Published May 11, 2019 in Bass Players You Should Know 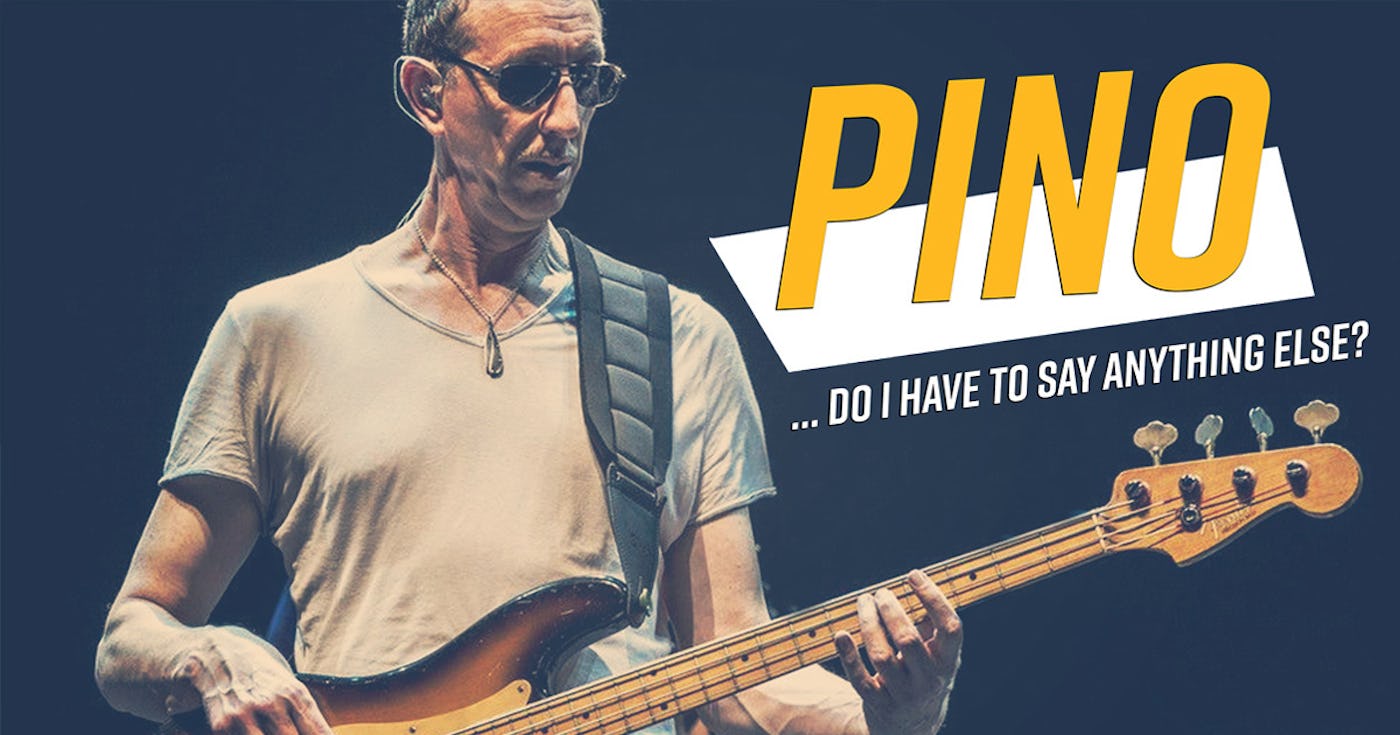 Pino lays it down in any style and he’s a master craftsman when it comes to tone. His touch, his sound, his feel, Pino’s got the whole thing going on.

If you discuss influences with any R&B, pop or jazz electric bassist, I guarantee that the name Pino Palladino will appear 99.9% of the time. During the past four decades, Pino has spread his colossal bass grooves into all corners of contemporary music, in almost every conceivable style and genre.

Hailed by many as the British Jaco, his early recordings with Paul Young put expressive fretless bass playing back on the map. He reinvented himself as an R&B wizard in the 90s and evoked the spirit of John Entwistle with The Who in 2002, before easing into his current vintage-vibe with The John Mayer Trio. 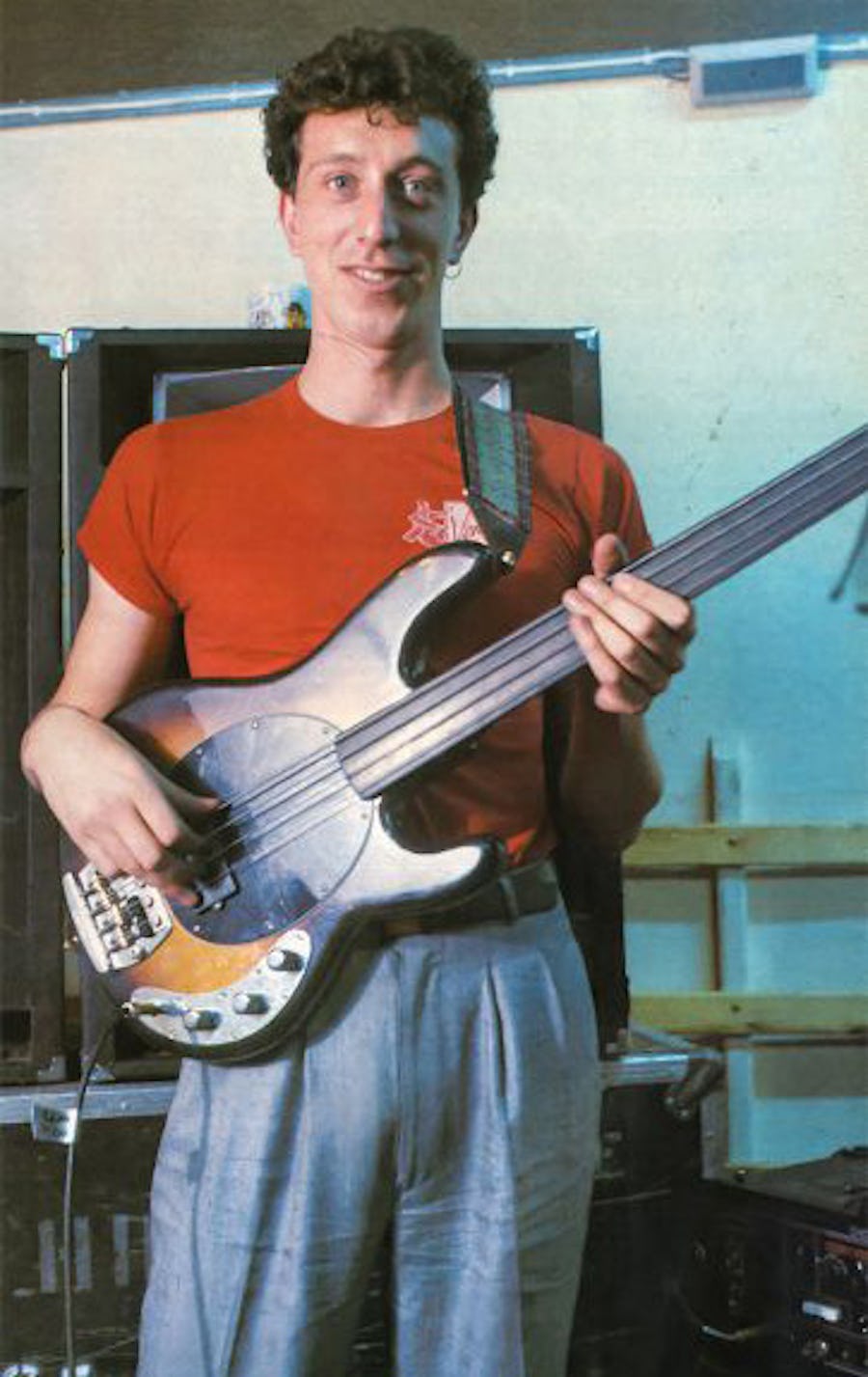 Born in Cardiff, Wales, in 1957, Pino started out on classical guitar aged 14, moving over to electric bass three years later after discovering Motown and Stax Records, along with players like James Jamerson and Jaco Pastorius.

In the early 80s he moved to London and landed the bass gig with ex-Squeeze keyboard player, Jools Holland. This was followed by a stint with synth-pop star Gary Numan, before getting his big break as a member of Paul Young’s band. His groundbreaking bass work on the 1983 album No Parlez culminated in a truly mesmerizing piece of fretless playing on Paul Young’s cover of Marvin Gaye’s ‘Wherever I Lay My Hat.’

Here's Pino demonstrating the famous intro to that track.

In an interview with the Guardian, Pino opened up about this part of his career.

It's about the song, the timing, all sorts of factors, but there are quite a few artists I've worked with where I've contributed more than they would have expected, such as coming up with sub-hooks that make the record better. It certainly worked for me; for a few years people were phoning from all over the world wanting that sound.

As the 1980s drew to a close the sound of Pino’s fretless MusicMan StingRay had become almost mandatory among studio producers of the day, with Pino often called in purely to overdub his sound over existing fretted bass tracks. One of the world’s premier fretless bassists had well and truly arrived.

Now it's easy to think that Pino is simply what we could refer to as a "groover". A bass player that is happiest in the background simply holding down the lowend and making the band, well, groove. And while that may be somewhat true, unknown to some, Pino has formidable chops and facility on the bass and can certainly solo with the best of them.

Just check out Pino's blazing solo fretless lines on his 5 string Musicman Stingray with Manu Katche on drums and Dominic Miller on guitar.

And here you can hear that soloing is not something he only saves for his 5 string, as he weaves his way around his trusty Musicman 4 string with ease.

Pino has played a number of basses during his career, but his trademark fretless sound came from his much loved Music Man StingRay, which he bought from Sam Ash music in NYC. He’d tried out a few fretted Music Man basses before but thought they sounded too trebly, but with this particular bass, which I think is a 1979 sunburst model with a rosewood board, he found a warmer more versatile sound and the rest is history.

Other basses in his early career included a fretless Pedulla and a Warwick Thumb, but his move back to playing more vintage-style fretted basses was led by a number of P Basses from the early 60s, one of which the Fender Custom Shop chose to reproduce for his signature model, complete with Thomastik-Infeld strings. He also plays a Moon Bass, which he used extensively for the D’Angelo Voodoo tour back in 2002. And as for his strings, he uses Rotosound Swing Bass stainless steel mediums, which he prefers for the fretless sound, and Thomastiks or La Bella heavy gauge flatwounds for the P Bass.

Aside from his StingRay, Pino’s fretless sound also became synonymous with a Boss 0C-2 octave pedal, which can really be heard on Paul Young’s I’m Gonna Tear Your Playhouse Down.

Pino continued to bolster his CV during the 1990s with sessions for the likes of Eric Clapton, Seal, Elton John, Tears for Fears, David Gilmour, Chaka Khan, Pete Townsend and Joan Armatrading, and jazzers such as Al Di Meola, John McClaughlin, David Sanborn and Chris Botti.

It was also around this time that he resurfaced in full on R&B groove mode, hitting unbelievable new heights with the epic 2000 recording, Voodoo by D’Angelo.

The album’s greasy, laid back feel caused a huge buzz among rhythm sections everywhere, and led to a who’s who of hip hop artists summoning Pino and his 1963 P Bass to their studios. Just listen to how Pino's killer bass line on Chicken Grease sits so lazily in the back of the pocket.

Pino is also all over D’Angelo’s 2014 album, Black Messiah, Erykah Badu’s Mama’s Gun and Aijuswanaseeing by Musiq (Soulchild) which all serve as an amazing schooling in the way of the lowend.

As the world ushered in the year 2000 Pino was about to reinvent himself yet again. Here's a quote directly from Pino:

It's important to be able to reinvent what you do. When the call came to play with The Who I was working with Erykah Badu and D'Angelo, and I had to change my whole style. The manager said: 'John [Entwistle] is dead. Can you do a gig at the Hollywood Bowl in three days' time?' You don't turn down something like that. It was only afterwards that I thought about the consequences. Pete Townshend's direction was, 'Play whatever you want, just as long as you play loud!'

The early 2000's saw Pino filling the bass chair with Simon and Garfunkel on their 2003 reunion tour and he was also drafted in for heavyweight album sessions with the likes of Adele, Ed Sheeran and even Nine Inch Nails.

It was during this steady schedule of studio work that Pino took a call that would once again cement his place as one of the most admired bassists in contemporary music.

When bassist Willie Weeks was unable to make a John Mayer gig for the Tsunami Aid benefit concert in 2005, drummer Steve Jordan suggested they call Pino and the rest is history. Countless tours and stadium gigs followed, with the band’s chemistry captured brilliantly on the 2005 live album, Try! And again on the 2008 live DVD, Where The Light Is.

Just check out the amazing chemistry between Pino, John and Steve on "Who do you think I was" to say it's a perfect demonstration of how in the pocket a trio can be would be an understatement, and please, let's just give it up for Steve Jordon on this one, surely one of the coolest drummers in history.

Pino’s career is nothing short of jaw-dropping. As a bass player, he’s merged his session-gained versatility with a deep mastery of groove. And while it’s no secret that he doesn’t read a note of music, and he’s never been one to rely on charts either, his intuitive understanding of the role of the bass and the responsibilities that go with it have ensured his standing as one of the most important bass players of all time.