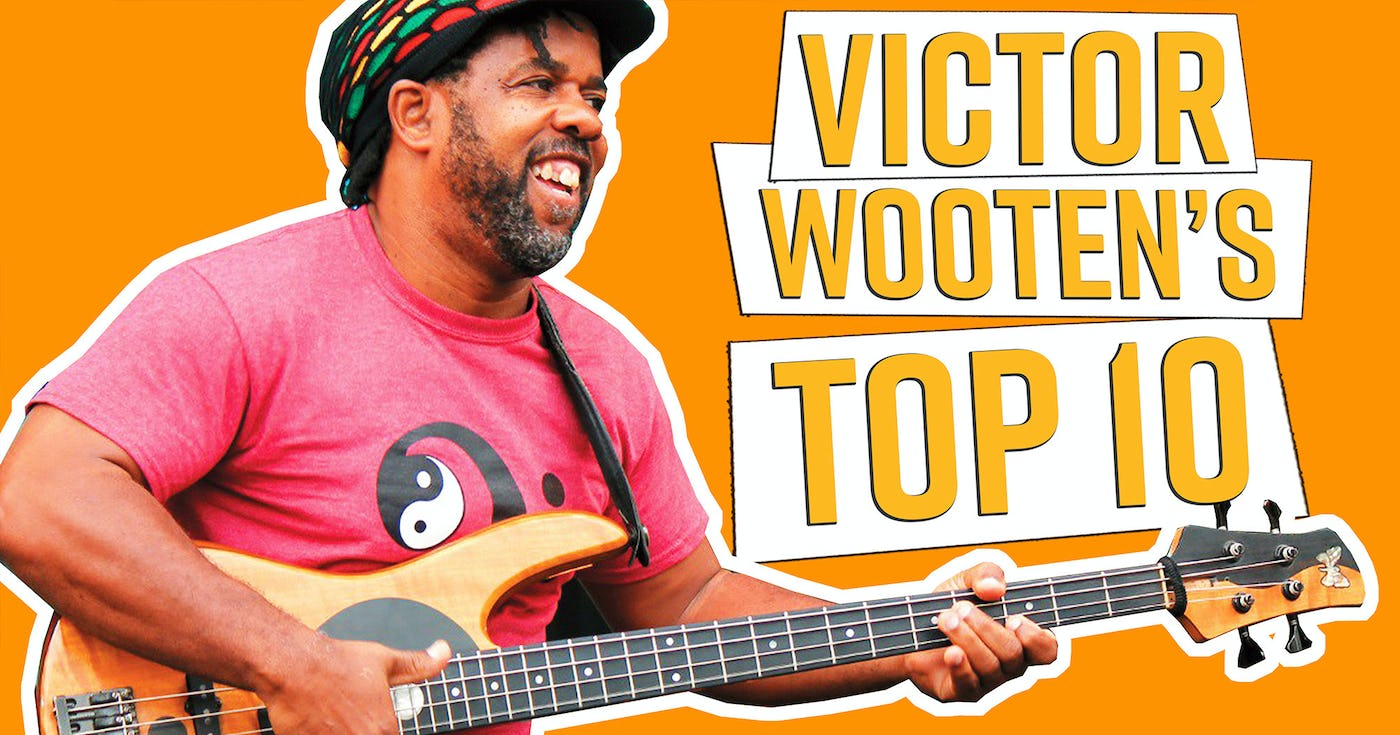 Victor Wooten is without doubt one of the most important bass players in the world today.

A five-time Grammy award winner and one of Rolling Stone‘s ‘top ten bassists of all time’, Victor Wooten certainly has the chops to put on a show.

But everyone knows Victor has monster chops – he can slap, tap, double-thumb, open-hammer-pluck, throw his bass in the air … but what makes him one of the true greats is his awesome musicality.

Today we’re going to take a closer look at the 10 most defining basslines from his incredible career!

We’re going to kick things off with a track that has become something of a signature tune for Victor ever since it appeared on his debut album A Show of Hands back in 1996.

Aside from showcasing Victor’s unbelievable technique, check out the way Victor uses muted notes to really enhance the overall groove. You might not know this, but the album version of You can’t Hold No Groove also features a very special guest vocalist - Will Lee

Another song that I know Victor gets asked about a lot is his thumb-melting slap workout, Classical Thump.

Victor wrote this song back in the mid-80s as an exercise for some of the thumb techniques he was working on and finally recorded it on A Show of Hands. It’s a really good one to get started with if you’re new to Victor’s thumb technique.

Victor has been the bassist for Béla Fleck and the Flecktones since the group's formation in 1988 and Sinister Minister is undoubtedly the most popular song in the Flecktones setlist.

It was recorded for the band’s self-titled debut album back in 1990. This was the first time that Victor really let his unbelievable technique loose on the world. Needless to say it completely floored bass players everywhere.

If you listen, the solo actually incorporates some of his licks from Classical Thump. Check out this clip from the Jacksonville Jazz Festival.

This one is from The Flecktone’s 1991 album, Flight of the Cosmic Hippo, and actually started out as a solo bass piece that Victor would keep playing at sound checks and rehearsals.

It’s a great example of Victor’s right-hand palm muting technique, which he uses to dampen the strings near the bridge and make it extra funky. The tune is actually named after a dessert the band had eaten in North Carolina.

Here’s a great version with Victor and The Wooten Brothers.

Next up is the opener from the Flecktone 1993’s album Three Flew Over The Cuckoo’s Nest. Victor came up with this track – aptly named Vix9 - the time signature makes it really difficult to feel, especially in the middle of the tune when it slows to a 3 beat feel.

At this point the band were only a 3-piece with Victor’s brother Roy on Drumitar, so Victor really pulls out all the stops to fill out the sound, never imposing on Bela’s banjo solo, but all the while keeping things interesting.

According to Victor, he and Bela Fleck wrote this next song, Stomping Grounds, during a sound check in Europe. You can hear it on the Flecktones 1996 album, Live Art.

It soon became a crowd favourite and if you ever get a chance to see the Flecktones play it live you’ll see why. There’s just no telling where it will go – as you’ll see in this clip from their 1996 appearance on the Conan O’Brian Show.

Victor started his arrangement of the Beatles classic, Norwegian Wood, when he was asked to play a solo piece at a John Lennon Fundraiser. He liked it so much he recorded it on his 1997 solo album What Did He Say?

It’s a masterclass in harmonics, two-handed tapping and how to play chords on the bass. Check out this performance for Hartke at the 2010 NAMM Show.

While Victor is, quite rightly, best known for his groundbreaking work with the Flecktones, in the mid-90s he was also a part of another awesome fusion super group – the Vital Tech Tones – alongside Vital Information drummer Steve Smith and Tribal Tech guitarist Scott Henderson.

The band never performed live, but they did release two mind-blowing instrumental albums – Vital Tech Tones in 1998 and Vital Tech Tones 2 in 2000. Taken from their first album, Snake Soda is, as you might expect, a jazz-rock-fusion tour de force with Victor taking no prisoners when it comes to his solo.

Victor once again demonstrates his unparalleled facility on the bass, playing chords, arpeggios and melody lines while also strumming in a cool flamenco vibe. This was the forerunner to Victor’s book, The Music Lesson.

Check out this impromptu performance for EMG TV.

With Dennis Chambers behind the kit and Vic on bass you’d expect some incredibly tight grooves, and it doesn’t get much tighter than on this track, Funky D.

In the absence of Chambers, Victor takes the lead on this duo take for KNKX Public Radio.

As always, see you in the shed…